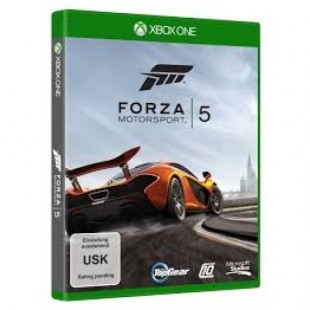 Forza MotorSport 5 - Xbox One Game Available at lowest price. We offer free delivery all over Pakistan. Scroll below to see complete specs and details.

Symbios.pk offers a best Forza MotorSport 5 - Xbox One Game price in Pakistan with fast shipping in all the major cities of Pakistan. Including Karachi, Lahore, Islamabad, Sialkot, Faisalabad, Peshawar, Quetta, Multan, Rawalpindi and many more cities at the lowest price.

Detail
You will show off your Xbox One with Forza 5. Its wonderful vistas and gorgeous cars make it perfect for public display. But as great as it looks, it's Drivatar that's Forza's real evolution.

Drivatar learns the way you and every player drives, taking that data and applying it to AI opponents, making every race feel unique. No longer will you smash your way into first place and coast along; drivers aggressively look to regain position, bump you off the road and refuse to concede simply because you are on the racing line.

Opponents are equally as likely to make mistakes, too. Many times drivers crashed spectacularly, leaving me to avoid the incident and try and stay in the race. There is a thrilling sense of speed that keeps you engaged in every part of a race, alert to whichever challenge is rapidly approaching your bumper.

Drivatar also allows for deeper difficulty customisation to suit your skill. The spread of medal rewards makes it all the more enticing to increase the challenge. It's no longer a chase for the podium, but a series of battles across the entire track. Battling to edge your way into the top 10 and earn a bronze is just as exciting as going for gold.

But as much as Drivatar learns how you drive, it doesn't learn how you like to race. It would be nice if Forza paired you with drivers who have a similar driving style to you, be it with finesse or smash-and-grab aggression. Spending half a lap looking for the perfect overtake only to be clattered a la Destruction Derby is infuriating.

Some flaws can frustrate in prolonged sessions. The classical music adds unnecessary pretension and a disjointed sense of calm. Equally, every crash sounds identical, cheapening their intensity, and the lack of night races and dynamic weather is inexcusable, especially when racers on the previous generation offer both.

Despite these problems, nothing takes away from what is a great game. Every moment is exhilarating, and Drivatar isn't just a buzzword but an example of what the next-gen can do.