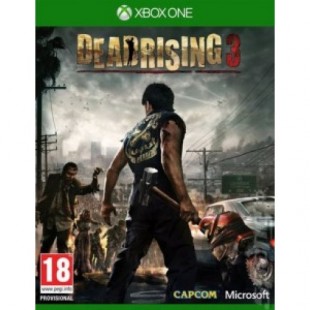 Available at lowest price. We offer free delivery all over Pakistan. Scroll below to see complete specs and details.

Symbios.pk offers a best DeadRising 3 - Xbox One Game price in Pakistan with fast shipping in all the major cities of Pakistan. Including Karachi, Lahore, Islamabad, Sialkot, Faisalabad, Peshawar, Quetta, Multan, Rawalpindi and many more cities at the lowest price.

Discription
When I finally completed Dead Rising 3, the kill counter in the corner of my screen read 26,978. Also I was wearing a luchador mask for some reason. But anyway, that’s areally big number. It’s like killing one zombie per second for seven and a half hours, though I played far longer than that. The fact that I’m still ready and willing to go for another round with a co-op buddy is a good sign that Dead Rising 3 is packing enough variety and goofy action to make it a good time.

Notice that I didn’t say it was pretty. Dead Rising 3 runs at an upscaled 720p resolution, it doesn’t have amazing textures outside of its cinematics, and it suffers from regular framerate stutters and occasional

They’re fun and easy to kill - easy enough that charging into the horde and bashing away with a sweet new weapon is a great way to build up experience. But you’ve got to know when to quit, because the zombie horde never will. Especially at night, when zombies are at their angriest, fear kicked in whenever I was stuck in the middle of a horde and my health dwindled into the red zone. But, since you can now save anywhere (unless you’re playing in Nightmare mode) the worst part about dying in Dead Rising 3 isn’t losing progress. It’s finger-tapping your way through the 45-second loading times.

Combat is a simple system of light and heavy attacks, but it’s the over-the-top animations and different effects of 300-plus weapons that really sustain it over the course of a 30-hour game. I never really got a chance to get sick of any one weapon, since they all break after a short period of use, and that forces you to mix it up. Getting to use something like the Freedom Bear automated machine gun turret takes effort, and that makes them feel special.

I love how most of Dead Rising 3’s collectibles are blueprints for crafting new weaponry instead of meaningless achievement padding. The recipes get positively goofy, like turning microwaves into laser beams, strapping a car battery to a mask of Street Fighter’s Blanka to create area-of-effect electricity attacks, and yes, turning a flashlight into a full-on lightsaber. There’s also a character upgrade system that’s extensive and well done, with most options on the menu providing real benefits that you can feel right away instead of minor stat boosts.

The Non-Zombies
What’s weird about the story - or weirdest, I should say - is that main character Nick Ramos can’t decide whether he knows he’s in a zombie movie parody or not. One minute he’s lamenting that he had to take human life, the next he’s putting on a sombrero and turning a leaf blower into a gun that launches sex toys at lethal velocity. The inconsistency feels weird if you play it straight, but the big laughs come when you mess with his wardrobe and he attempts to be dramatic while wearing an afro wig and a miniskirt. Beyond that, it’s pretty much zombie cliche all the way (though in a parody that's kind of the point). Oh, and there’s no timed hunt for Zombrex this time, but you do have to push the story along every so often or the town blows up.

The acting is respectable, even with minor characters. Each companion has their own sidequest fetch job you have to do, like tracking down lost items or escorting them to a location, but along with their color commentary when they’re on your team, those background stories gives them great context and personality. There's Dwayne, the cop who wants access to the police station's armory, Kelsey, the country girl who needs help finding her family, Troy, the reformed gangster muscle who can't beat you so he joins you, and many more. I didn't even see a third of them, but all are fully voice acted. That character development makes it more memorable when you get them permanently killed.

Fortunately, you don’t have to babysit them too much - if you run from a fight, they'll generally run with you - and it’s hilarious to gear them all up with weapons and watch them go to work. But, after many hours of having fun with them, I decided I was better off finishing the campaign solo. Companions get in your way a lot, blocking doors, making items hard to pick up, and standing next to that zombie you're trying to bash. They won't turn on you if you accidentally hit them too many times like Dead Rising 2's companions, at least.

The other notable characters are the Psychos, which are optional boss battles. They aren’t all that impressively designed, but they are the most interesting and grotesque villains, like an organ-harvesting doctor or a hideously obese woman in a Rascal scooter who murders anyone who gets close to her buffet.