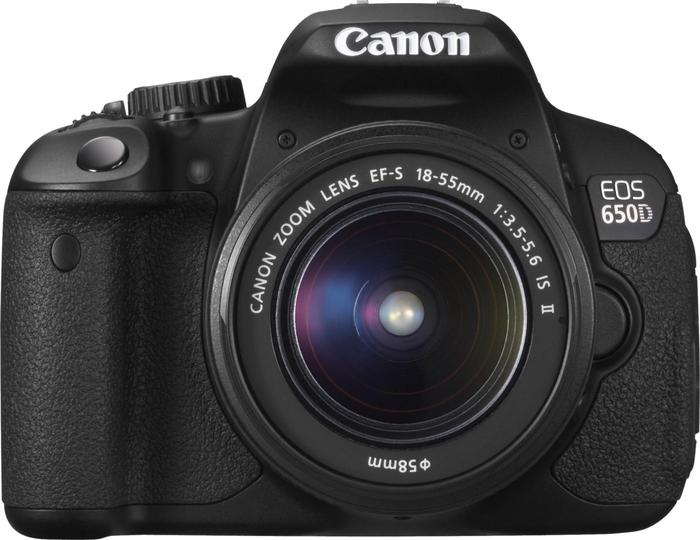 Canon has finally ditched the three-year-old DIGIC 4 processor in favour of the DIGIC 5 chip used in various recent PowerShot cameras. This raises continuous speed from 3.7fps to 5fps, and also introduces in-camera chromatic aberration (CA) correction. This eliminates discoloured halos around high-contrast lines, and is something Nikon's SLRs have offered for many years. These twin benefits of the faster processor aren't available at the same time, though. With CA correction enabled, 5fps shooting lasted for just three frames before slowing to 2.1fps. With it disabled, it lasted for 29 frames and then slowed to 3.6fps. It's a shame that CA correction can't be set to switch off automatically when continuous shooting is selected.

Automatic high dynamic range (HDR) shooting is now available, and has a dedicated position on the mode dial for quick access. Curiously, the camera slightly crops and then enlarges the image back to 18 megapixels. More worryingly, we found that autofocus problems were quite common in this mode. There's also a new Handheld Night Scene, which combines three exposures to reduce noise. It just made things softer at ISO 3200 but proved its worth at ISO 12800.

For us, the 600D's biggest weakness was its slow autofocus in live view mode. Live view on an SLR bypasses the main phase-detect autofocus system, and the 600D's backup contrast-detect system was appalling, taking up to four seconds to lock onto subjects. For the 650D, Canon has integrated additional phase-detect autofocus points onto the sensor. This appeared to improve live view autofocus speeds, but only to an extent – it still took between one and two seconds to focus. That's still likely to be too slow for most people. It's also significantly slower than the Pentax K-30 we're currently mid-way through testing.

The main autofocus system has nine points, but this time they're all cross-type for increased sensitivity. Previously only the centre point was cross-type, which meant we rarely bothered to use the other eight points. However, we experienced the same autofocus reliability issues that we've seen on previous models when using the 18-55mm kit lens.

Focusing is much faster with the viewfinder than in live view but not always as accurate, with slightly soft focus in about a third of our shots (this was one of the worst offenders)

This is the first SLR to include a touchscreen, and it's extremely well implemented. As before, the screen shows various shooting information, which turns into a control panel when the Q button is pressed. However, it's now far quicker to navigate to the required function by prodding it rather than using the four-way pad. Tap a setting once and changes can be made using the command dial, while tapping a second time brings up the full set of values for dial or touchscreen adjustment.

The touchscreen is in its element in live view and video modes, where it's used to set the autofocus point. It's tremendously useful to be able to move it while recording video, now that full-time autofocus is available in video mode, thanks to the on-sensor autofocus points. It's a massive improvement over the violent lurches that completely spoiled the 600D's videos, but it's still not brilliant, with frequent focus hunting and long periods that were completely out-of-focus. However, while video autofocus on the 600D was completely hopeless, on the 650D it's OK for casual use.

The autofocus motor still spoiled the soundtrack when using the 18-55mm lens, but it was much quieter with the 40mm STM lens, which is specifically designed for quiet operation while recording videos. It's certainly not silent, replacing chattering twitches with duller whirrs, but it's a welcome improvement.

Adjusting manual exposure while recording is now totally silent, with shutter speed, aperture and ISO speed controls available on the touchscreen. The integrated microphone is now stereo rather than mono, and the 650D retains its predecessor's external microphone input and manual volume control. Volume control and metering are only available in the menu, though, and not while recording.

Both of these frames from 1080p video clips look pixel-sharp, but the Panasonic GH1 (right) reveals more definition in texture in the wood, the thinner strings and markings on the knobs

We also experienced the same problems with moiré interference that we've seen from countless other SLRs' video modes, where dense repeating textures exhibit swirling interference. We shouldn't dwell on the negatives, though. Colours in videos were sumptuous, noise at fast ISO speeds was impressively low and shallow depth-of-field effects gave footage a beautiful film-like quality.

We struggled to find anything to complain about the 650D's photos. The 600D sets an extremely high standard but the 650D fared even better in our studio tests. The CA removal not only eliminated halos but generally tightened up focus towards the edges of frames. Meanwhile, the improved noise reduction maintained slightly crisper details at ISO 1600 and 3200 and exhibited less chroma noise at ISO 6400 and above. Noise in unprocessed raw files appeared to be a little heavier than from the 600D, though. Regardless, the 650D is arguably the best performer at this price for image quality. Automatic exposures were expertly judged and JPEGs displayed gorgeous colours.