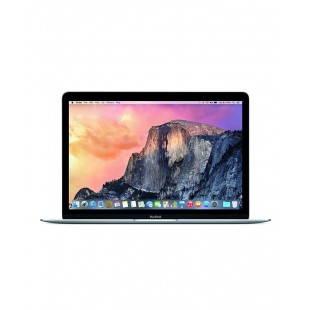 Stock Status: This product has been discontinued from our stock. Please call our Support Center at 03-111-444-717 for further assistance and availability of this product or email at [email protected]
Laptops and Computing price in Pakistan

A keyboard reimagined from A to Z.

From the beginning, our goal was to design a full, uncompromising Mac experience. And a full-size keyboard is an essential part of that. In order to fit a full-size keyboard in the incredibly thin MacBook, we designed the keyboard from the ground up. Each component has been rethought specifically for the new MacBook, from the underlying mechanism to the curvature of the surface of each key to the distinctive new typeface. The result is a keyboard dramatically thinner than its predecessor. Now when your finger strikes the key, it goes down and bounces back with a crisp, consistent motion that makes typing with precision a breeze.

Traditional keyboards use a scissor mechanism, which tends to wobble around the edges. This creates a lack of precision when you strike anywhere except the center of the key. We needed to reduce key wobbling for a keyboard this thin; otherwise, striking a key off-center could result in the keycap hitting bottom before a keystroke registers. So we designed an entirely new butterfly mechanism, which is wider than the scissor mechanism and has a single assembly made from a stiffer material — allowing for a more stable, responsive key that takes up less vertical space. This innovative design improves stability, uniformity, and control — no matter where you press on the key.

When we set out to design an incredibly thin keyboard, one of the first things we considered was how to backlight the keys in a way that took up less space while delivering an even cleaner and more refined look and feel. To do that, we removed the row of LEDs and the light guide panel that distributed light throughout the keyboard and instead placed an individual LED under each key. These LEDs are calibrated for uniform brightness, so every key and character looks clear and sharp with minimal light around the keycap. All while being engineered for as much energy efficiency as possible.

The 12-inch Retina display on the new MacBook isn’t just picture perfect — it’s also paper thin. In fact, at just 0.88 millimeter, it’s the thinnest Retina display ever on a Mac. A specially developed automated manufacturing process forms the impossibly thin edge-to-edge glass that’s only 0.5 millimeter thick. And we reduced the space between display components for a tighter, more integrated design.
To deliver the gorgeous Retina experience on the sleek new MacBook, we had to innovate on every level, right down to the pixel. So we redesigned the pixels to create a larger aperture, allowing more light to pass through. This enabled us to use LED backlighting that’s 30 percent more energy efficient than the Retina display on any other Mac notebook, yet still achieve the same level of vivid brightness.