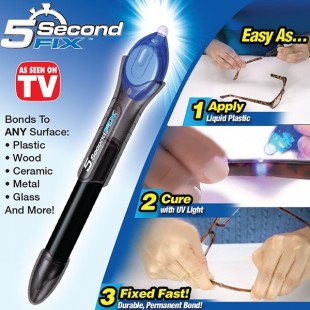 Only One Order Per Customer Will Be Served.

5 Second Fix bills itself as a liquid plastic welding compound that allows you to create an everlasting bond with just a flash of the UV light. They state 5 Second Fix is not a glue but will fix, repair, and seal virtually anything including metal, wood, glass, and more.

5 Second Fix is a liquid resin, not a glue, that stays in liquid form until it is cured with a UV light of a specific wavelength. This type of technology has been in use since the 1960s in industrial coatings because of its consistency and reduced environmental impact; a version of UV welding is used by dentists to fix teeth and is popular in 3D printing. While epoxies or glues are certainly good for certain things, the main benefits of a liquid “weld” resin in this type of application is that it has no fumes, no sticky residue, works on wet or dry surfaces, and almost instantly hardens but only when exposed to a specific light wavelength. The resulting weld/bond can be as tough or tougher than a glue.

5 Second Fix comes in a pen-like device that has an applicator with brush on one end and a small UV light on the other. To use 5 Second Fix, they instruct you to brush it on the items you are trying to bond and press them together. Since it doesn’t dry from air/heat, you can reposition as necessary. Then, they tell you to shine the UV light on the liquid and voila! The two units are now melded as one. The commercial shows 5 Second Fix being used to repair a pair of broken glasses, a water pitcher, and even a drone. They tout 5 Second Fix can be used on a leather handbag strap a show it being used to weld a tow cable together and pull a 4,400 truck. They add 5 Second Fix is flexible and can be sanded and painted so it can be used everywhere.

BENIFITS:
Flawlessly bond everything from plastic to metal, to split wood and broken glass! Unlike glue and common adhesives, 5 Second Fix™ lets you position and reposition until you want to make the weld permanent. There’s no sticky mess and you can even sand or paint just like New!

ABOUT ITS LED LIGHT:
5 Second Fix uses a battery powered UV LED light to harden the glue. You are supposed to apply the 5 Second Fix glue to where you want it and then just shine the UV light on it for 15-20 seconds and the resin hardens. The UV light does the job of “wielding”. The UV LED light of the 5 Second Fix is also not very well made and the battery may be already dead when it arrives. When the battery gets weaker the light also dims out hampering the bonding. So if you have a larger UV flashlight that covers a larger area, it will help repair items faster.